The Swatch Group is known for never having been swayed by the façade of this world. The brand strongly believes that beauty is just as much governed by what’s within as by what’s without. This view led them to create quirky and avant-garde products as well as those that are technologically advanced and laced with years of watchmaking prowess. Swatch group subsidiaries include much-loved luxury brands like Harry Winston Inc, Breguet, Balmain, Calvin Klein Watches, Tissot, and Rado; making it a one-stop-shop for people from all backgrounds and ages.


BIRTH OF THE SWATCH GROUP


Let’s go back a few years to unearth the ripple effects of the crippling economy that led to the birth, the downfall, and the imminent Phoenix-alike rise of the Swiss watchmakers.

In a world with more black than white, the Swiss watchmaking industry set out to splatter some good and balm the wounds of the Great Depression in 1930, as they came up with ASUAG. Soon, ASUAG started acquiring companies one after the other, just like we gobble up dumplings. It took over the General Watch Co. as well which had an array of brands. On the other side, SSIH was a consequence of mating between Omega and Tissot which made it an idyllic miscellany of the luxury segment and the mid-range.

SSIH and ASUAG had a common thread of generating employment as well as calming the untamed waves of uncertainty that the 1920s brought along. But soon the shine of the exquisitely engineered Swiss watches was dimmed in the face of Japanese companies who brought with them inexpensive quartz watches. This was called the quartz crisis which occurred in the 1970s, hitting SSIH and ASUAG right in the face and bringing an uninvited guest- bankruptcy, to the party.

As SSIH and ASUAG were making funeral arrangements, Nicholas Hayek and Ernst Thomke swooped in like Messiahs. Unwilling to let the Swiss watchmaking legacy drown in the sea of double-digit inflation and the weak American dollar, Nicholas dreamt of bringing a revolution into the world Swiss watches, laced with their indigenous technical prowess as well as modernistic interpretations. The two companies merged into one, Hayek became the Chairman of the Board and steered the boat towards making Swiss watches not only inexpensive but also a fashion accessory rather than a device that stereotypically tells us how deep our wrinkled are getting with every passing second.

Hayek looked to Ernst for aid, who along with two associates assembled an inexpensive ‘second watch’, which paved way for the engulfing consumerism that plagues the fashion industry today, but that was as avant-garde as Meryl Streep in the 80s. This is the story of how a star was born and was named the Swatch Group. This star would later go on to lighten up the fashion galaxy and manage to establish a legacy of glamorous watches alongside high couture fashion accessories.


WATCHES BUT MAKE IT A FASHION STATEMENT 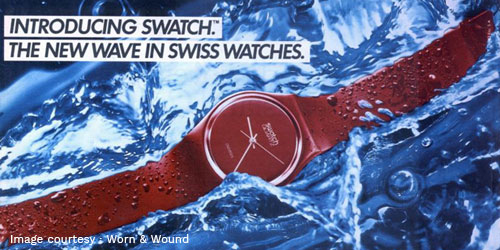 1983 saw the launch of the Gent Swatches which shrouded under its sleek dial an essence of the 80s pop culture that was somewhere always pulsing within the veins of the US Millennials. Swatch tapped these individuals’ love for the said culture by incorporating their weaknesses in these watches- vivaciously bright hues celebrating life and youth with classic metallic plates that were a hallmark of Swiss Watches. What’s more, you ask? You didn’t need to sell a lung or two to afford this collection, and these watches could easily make their place in the vintage grandpa watch display. Pretty cool, right? 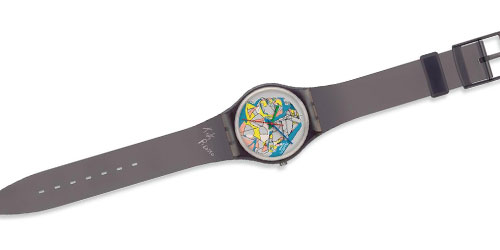 Soon after the Swatch Group’s dip into fashion, the dial of the Swiss watches quite literally became blank canvases for artists to stain with their surreal paintbrushes as the group paired with contemporary painters.

1985 saw Kiki’s outpouring of the contemporary world taking reigns of these Swiss watches with a palette of vibrant hues intermingling to create avant-garde pieces. The post-modern, light-as-a-feather watches were a hoot in the market due to their intense graphic outlook towards a deranged world. The magnificent painter pushed Swatch upwards with a graphic novel-like effect emblazoning the dials, the designs being left completely open to interpretation. 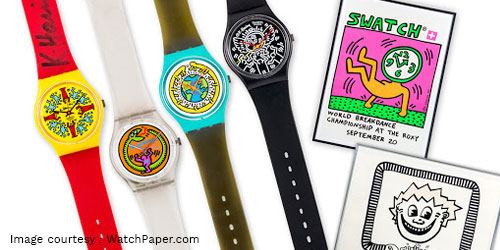 Keith Haring continued the iconic 80s vibe in Swatch by giving the abstract ramblings of his mind the form of people, animals, and whatnot. His designs left the dials embellished with screaming pop colours, each hue standing out in its own unique way.

The plain straps of the watches elevated the colourful designs, drawing attention to the essence of the art. The designs varied from serpents, an interlocked group of people, and the circumference of our beautiful planet. This collection drew further attention to how the Swatch group toyed with the idea of art resting on your hands. 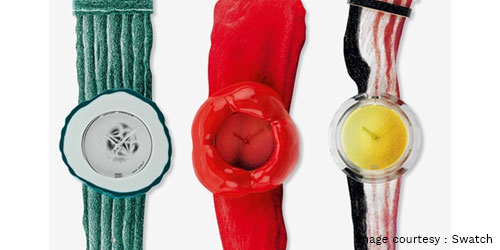 This collection in 1991 by the Austrian artist, Alfred Hofkunst was an era the world had never witnessed in watches. The kind of innovation that the Swatch Group enabled in its watches both structurally and design-wise through this collaboration was, and still is, unimaginable.

With twisted ideas of sophistication, Alfred crafted watches mirroring the freshness of a slice of cucumber, the fiery taste of red bell pepper, and a fine escalope of the beloved fatty bacon. This fresh take on fashion watches symbolized the collective love for food and was displayed in uptown food stores. Like tasty platters of food plated in front of a family, it wasn’t long before the entire collection was polished off. 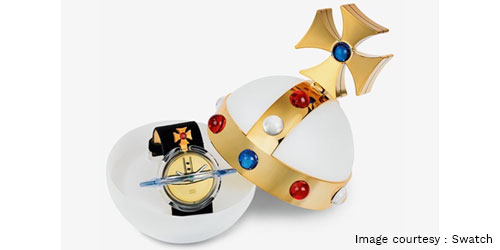 The Swatch Group was blessed by an opportunity to collaborate with the fashion God, Vivienne Westwood, who created extravagant fashion watches that sold better than cushion cut diamond rings at the time. They were like little pieces of wearable art, oozing with fashionable creativity.

This collaboration led to the birth of ORB, the epitome of royalty wrapped in Swiss technical prowess, PUTTI, the pastel-coloured and aesthetically soothing romantic watch and COCOTTE, a white strapped watch with sparkly golden embellishments. In 1993, these went on to become the definition of opulence personified with a side of some teen rebellion. It truly was “fashion that ticks.” 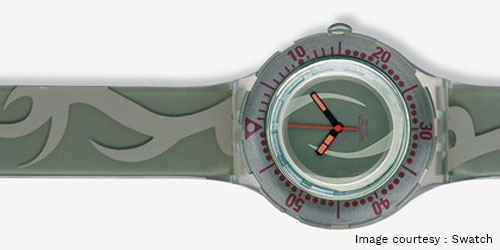 1999 blessed the Swatch audience with another one of the brand’s fantastic collaborations- this time with the biggest skateboarders of the time, Tony Hawk. This was the era Swatch immersed itself into creating sports watches, celebrating the togetherness which it brings.

With a neon dial resting on blending coral elements with fifty shades of grey, the Swatch Switch McTwist brought yet another unique outlook into the world of watches. This smoky watch was born out of Swatch becoming the title sponsor for the BMX World Cup.

The Time Tranny Edition by Swatch was the brainchild of the photographer Dave LaChapelle and the transsexual icon, Amanda Lepore, who made this in order to represent and celebrate the LGBTQ community.

The Swatch Group standing in solidarity with the community and bringing this to an international platform was an enormously revolutionary step in fashion. With an outburst of pride colours, the dial supported grand headdresses on Lepore who can be seen fashioning bold lip colours. The strap was an equal riot of colour with a collage of images, all wearing and owning their identities openly and proudly. 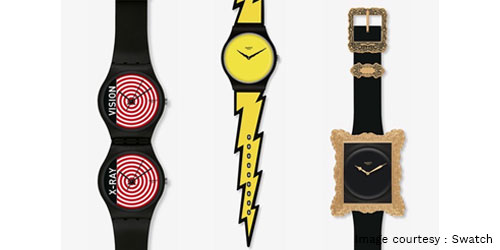 The collaboration with the Adidas designer, Jeremy Scott brought the fun party to Swatch with his wonderful ideas filled with creative energy and peppy tag lines that bedazzled everyone. Three watches were launched, each with a lively spirit of its own.

OPULENCE gave off a vintage vibe owing to the black square frame painted with gold, the WINGED SWATCH with the angel-like wings attached (and Jeremy hence said “time flies”) and LIGHTING FLASH, a popping yellow watch with a zig-zag silhouette. This pop aesthetic twist that transformed watches into edgy and peppy accessories could only be brought by Adidas. We are eternally grateful. 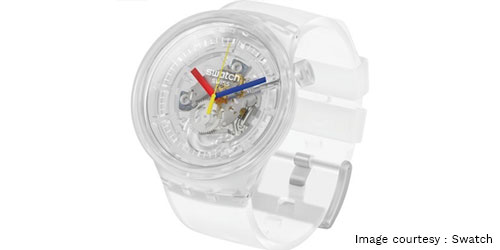 The crazy journey of collaborations has won the Swatch group laurels and praise from its customers but this time, the brand made its past the muse. The Big Bold Jelly Collection is an extension of the Original Jelly Fish GZ010 with crazy modifications and a fresher look.

Infamous for hitting the audience with whimsical and unusual watches as a result of collaborations with many artists and fashion designers, this time Swatch has gone for a classic transparent look. The colours though can be seen popping from the dial just to add a dash of fun.

Aesthetic, peppy, and trendy just can't cut it when it comes to the immensely diverse Swatches that have been churned out where designers have been given full artistic freedom to go crazy on the watches. The raw creativity of the artists in the idyllic form is then brought across by Swatch with their Swiss watchmaking expertise. Over the years, the Swatch group has indulged in increasingly crazier methods of marketing like sponsoring the World Breakdance Championship and pulling up street paintings in Paris and London alongside celebrating the launch of sports like snowboarding; all of which have made this group extremely one-of-its kind and more than just a brand that makes quirky, colourful watches. 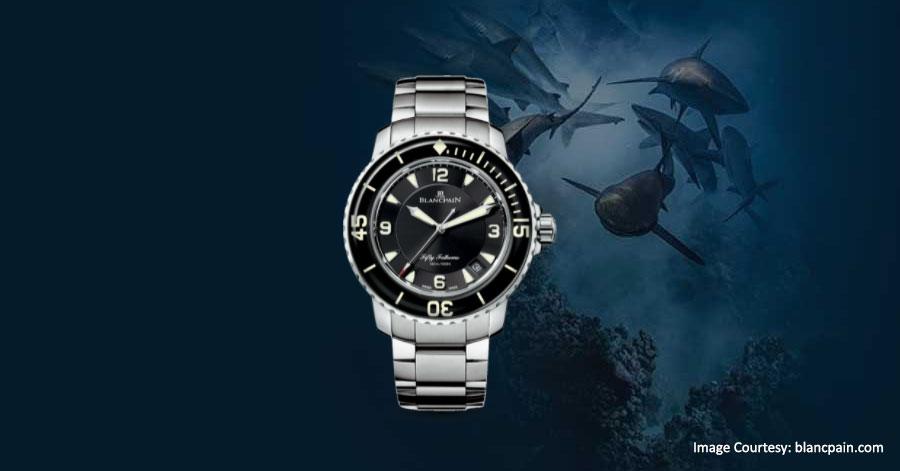 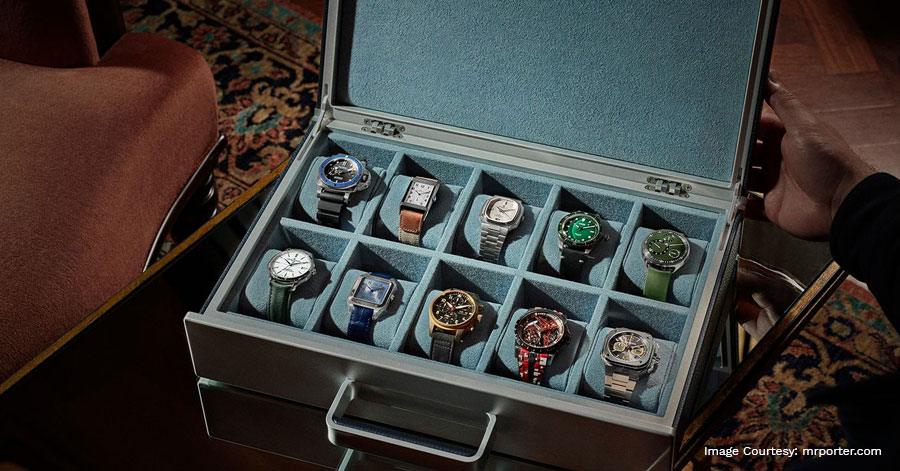