The Biggest Luxury Conglomerates in The World

The Biggest Luxury Conglomerates in The World

Conglo-what? You might be wondering what this means but it’s a term more familiar to us than we’d know.

A conglomerate is the parent of many of its diversified offspring businesses spread over a plethora of industries.

So, it’s as disparate from a corporation constituting a multitude of business entities in only one type of industry, as pasta is from macaroni.

Luxury conglomerates are on the slope to become one of the tallest skyscrapers in the best sky of global companies as humans' need to immerse themselves in luxury and quality increases one Louboutin per minute. 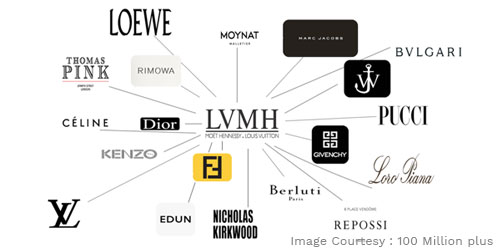 LVMH is the Garden of Eden for luxury enthusiasts with Bulgari, Chaumet, Tiffany & Co, Tag Heuer, etc replacing the Tree of Life as well as the Tree of Good and Evil blooming in its bosom. Bagging the first place in Deloitte’s list of Top 100 luxury companies, LVMH has more than 30 billion euros rolling in every year.

Bernard Arnault, now the richest man in all of France, started out as the Chairman of his father’s construction company and eventually, went on to reorganise the House of Dior. With the glitz of luxury goods in his eyes, a vision of global expansion on his mind, and with the quiet yet sly walk of a predator, Arnault soon took over LVMH as CEO in 1989.

After that, LVMH’s circle of expansion and acquisition started with Louis Vuitton and Givenchy, encircling in Marc Jacobs, Sephora, and many more to its last acquisition of Tiffany & Co in 2019, making a tally of LVMH brands to 75 in total.

You’d be wondering how CEOs of these excellent brands ever conceded in parting with babies aside from bankruptcies in some cases.

Well, it’s because Arnault isn’t a totalitarian dictator who’d rip the brands of their innate identities as each of them hum a melody of their own. And being a connoisseur of global luxury brands, he understands that. Akin to giving your children autonomy to flourish independently, Arnault does the same to the brands under the LVMH umbrella, an unfailing business strategy leading to the impending success of both the brand as well as the conglomerate. 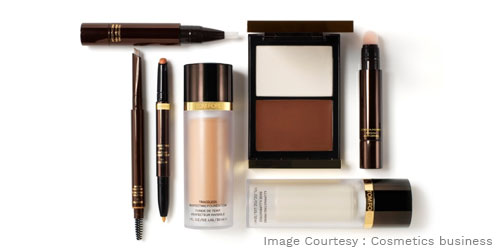 When has anything heavenly been easy to pronounce? In that spirit we present to you, Estée Lauder Companies - that which started with merely four skincare products now has an empire of the most luxurious brands in the world.

Estée retained the answer to the most convoluted question, “what do women want?” and this sewed the fabric of the brand.

She knew that in order to etch the brand in women's minds her products must touch them and exhibit prominent results to enable return sales and that’s exactly what happened.

With her creativity and visionary entrepreneurial spirit, she exploded in the 1950s, a time women used perfume occasionally, with Youth-Drew which was essentially a bath oil that made a perfume too. It started with her debut into the olfactory business with aplomb and then the expansion never really ceased.

Dealing with the manufacturing and marketing of brands like MAC, Bobbi Brown, Clinique, Michael Kors, Tom Ford, and many more, her impeccable taste and class oozed from every one of the portfolio brands as well. Other than her exemplary prowess in visual merchandising, her brain churned to formulate successful marketing techniques like free gifts with purchases which became a trademark of Estèe Lauder.

This woman who challenged the status quo with products to die for and live for along with spearheading a multitude of luxury brands, made her own humble abode in the warmth of the earth in 2004, leaving behind a legacy destined to last eons. 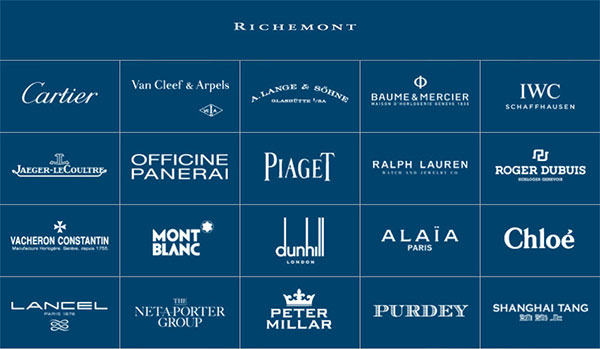 The torch-bearer of hard luxury products, the Richemont group has had a birth akin to LVMH’s wherein investments led to ownership and boom! 1988 didn’t know what hit it.

The Swiss-based conglomerate was once the Rembrandt Group that was established by Dr. Anton Rupert, an excellent strategist who hopped onto this train for expansion owing to his heart that thumped for diamonds, wine, and everything nice.

With a portfolio as diverse as Accenture’s workplace, Richemont Group has its branches in the Tobacco industry, jewellery brands like Van Cleef & Arpels, Buccellati, Cartier, luxury watchmakers like Montblanc, Ralph Lauren and online distributors like YOOX NET-A-PORTER Group and Watchfinder & Co.

The Richemont Group revels in the excellent craftsmanship of their Maisons scattered all around the world who make the brands as exclusive and timeless as they are. Now, if we talk numbers, the retail space fetches the group 54% of its total sales with over a thousand wholly-owned or franchised mono-brand stores. Richemont Group is always in a tug of war with LVMH over popularity and power with a smart investment portfolio and an entirely different expansion strategy which makes it what it is. 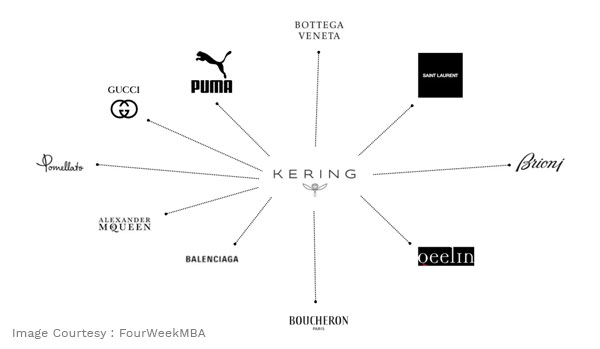 What a flagship-size candy store is for a child, the Kering group is for millennial shoppers with all the global luxury brands under its belt, making  it one of the most profitable luxury conglomerate. The empire that reigns the luxury goods market did not really start with a big bang but as a Frenchman, Francois Pinault started his own timber company and soon, strategically started buying smaller companies to get listed on the stock exchange.

Like spring rebirthing the trees, Kering has  renewed itself as it bought a leather goods company, whose iconic handbags are extensively vaunted by white-collar businesswomen and models alike- the legendary brand Gucci. In the same year, Kering roped in the iconic luxury brand worshipped by many for its godly couture, Yves Saint Laurent. The expansion train halted on many stations of Bottega Veneta, Balenciaga, Alexander McQueen, Stella McCartney, all of which ooze fashion, striking a chord in your luxury-stained heart.

With a name to be pronounced “caring”, this conglomerate makes sure its actions towards the brands under its wing are synonymous with its name. Mother Nature nurtures all its inhabitants and taking hints from this, Kering also supports its brands' expansion into unexplored markets to let them bloom like pretty pink bougainvilleas. The group also strives to solidify the positioning of its brands in existing markets and strengthen its distribution channels.

When taken over by Pinault’s son, Francois-Henri Kerin ventured  into the territory of sustainability in the luxury industry alongside smashing the patriarchy, being an awarded gender parity activist, striving to end violence against women with Kering Foundation. The eco-friendly and ethical practices undertaken by the Kering Group speak volumes for their commitment to satiate the lust of luxury, to contribution to value creation and to ultimately make the world a better place with lots of luxurious bling in it. 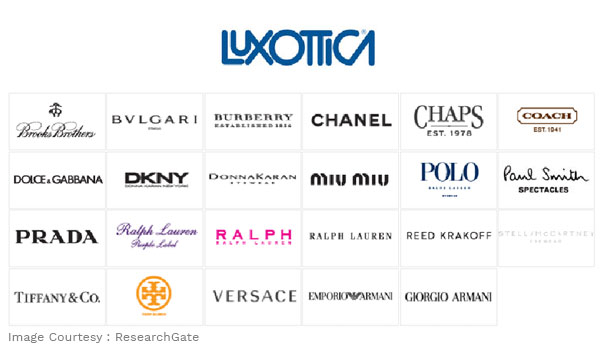 The champion of eyewear that Luxottica Group is today wasn't something that the brand always had the luxury of calling themselves.

This now renonwned brand had to work from the ground up to paint itself as a worldwide lauded luxury conglomerate.

Leonardo Del Vecchio, the owner, started out with a small eyewear workshop in 1961 and it only took him a decade to climb up the hall of fame with its first acquisition Scarrone SPA, a wholesale distributor in Italy and then the expansion frenzy saw no end.

Hard work was what Leonardo thrived on which is why Luxottica Group worked unremittingly throug the clock, meticulously researching and unearthing newer technologies to bring to the table. With a vertically integrated business model, the group was driven to turn “Made in Luxottica” into a tag worth a pocket full of quality, craftsmanship, and some serious big bucks.

Leonardo’s entrepreneurial prowess was inscribed into the minds of plenty, all plated with gold as the brand signed a license agreement with Giorgio Armani, a big shot both then and now in the luxury goods market, proving that Luxottica was a force to be reckoned

with as well. This agreement was in sync with Leonardo's vision of how fashion designers could bring brilliant silhouettes as well as a beautiful revolution in eyewear. Once Luxottica’s name was associated with Armani and also with the New York stock exchange,

acquiring Vogue Eyewear in 1990 was cakewalk, which was another brilliant move on his part.

To create fashionable value to its eyewear collection, the Luxottica group made these moves which became a foundation for the edifice that it was going to create. After many milestones, the group’s manufacturing and distribution excellence started reigning the mind of Bvlgari which ended in a license agreement with the brand. The end of the 20th century also saw the acquisition of Ray-Ban followed by a licensing agreement with Chanel.

Cut to 2014, the group’s vigor to pursue the best hasn’t died out evident from the collaboration with Google to integrate google glasses in Luxottica’s eyewear. 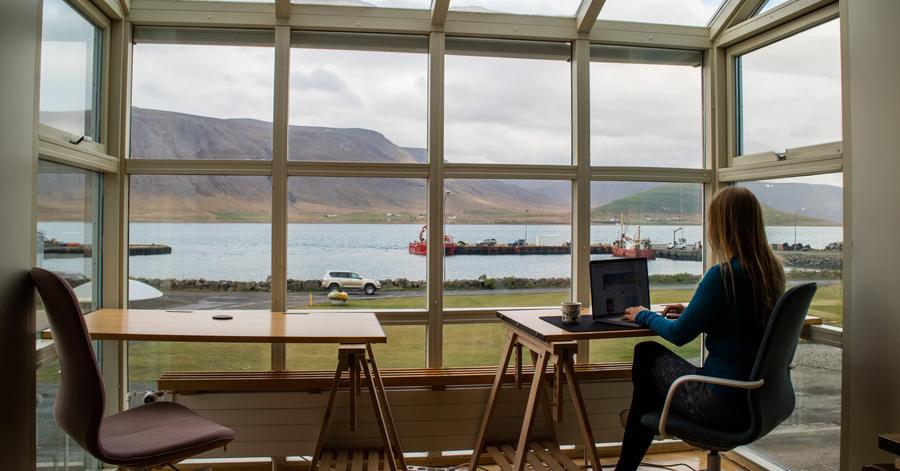 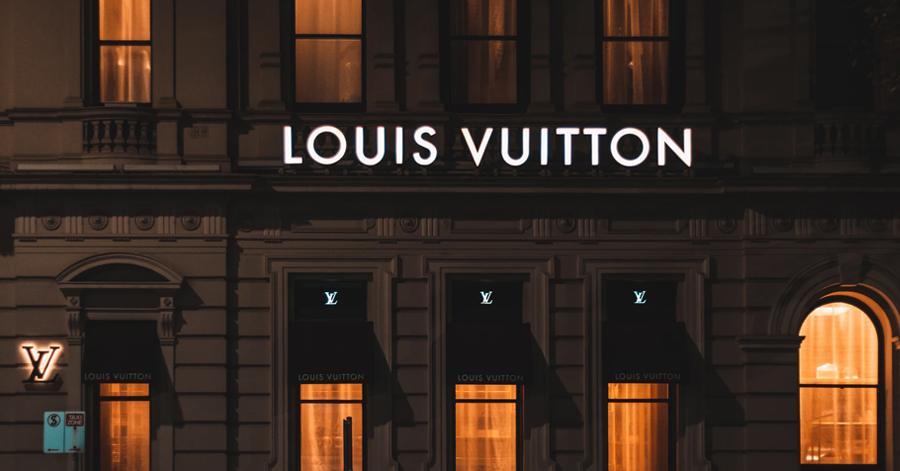 A Peek Into a New Age Career: Luxury Brands 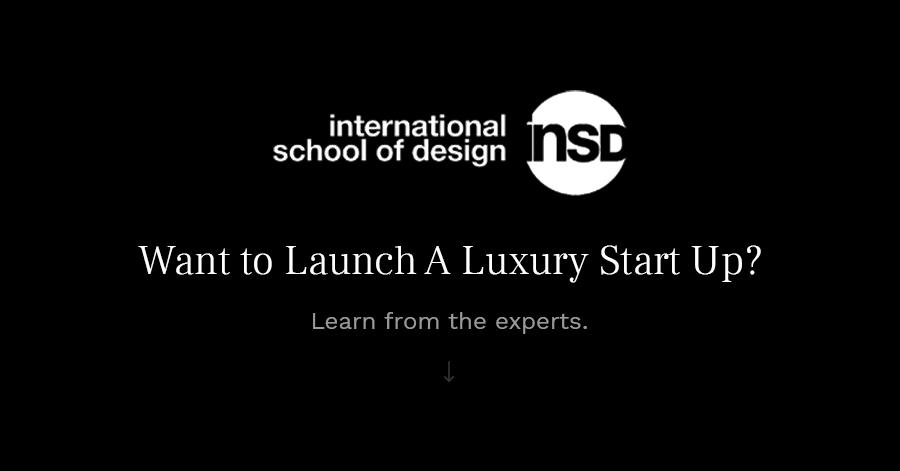 Want to Launch A Luxury Start Up? Learn From International School of Design, New Delhi