Adishwar Kumar Jain( Popularly known as Adish Jain) is a resident of Navi Mumbai ( India). A former University 'On the Spot Painting' champion, he is currently being considered as  most renowned torn paper collage artist of India.  Adish uses discarded magazines, news papers, labels, old greeting cards, calendars, textiles waste design CADs in the making of his unique collage paintings.
Adish is a hobby painter, does not possess any art degree even was honored to have his work selected for the nomination for National Art Award by Alva Foundation in year 2012-13 as well by Bombay Art Society in year 2019. While serving in Punjab State in mid 80s with Oswal Group when the state was flooded with terrorists and no source of entertainment, he utilized his evenings making several paintings. That terrorism period of 8 years, was utilized to excel in this art of collage making.

"I love travelling and when I look at the world my artistic feelings takes over the vision and quickly start thinking to convert this in to a collage painting. I hope to create a real experience, instead of just a picture of an experience. But that sounds a little too huge... really I'm always hoping for that feeling of having the senses of a kid, where everything is new." In the collages, some of the little paper pieces I use are deliberate, but in most I'm trusting randomness to help build an end result more interesting than I could have planned"
His collage paintings were exhibited by Palace Art Gallery, Red Car, England in March 2017 and he was perhaps the only Asian selected to participate in this groups exhibition of 26 international artists where around 700 entries from all over world were invited for the selection.  Recently in September 2018 his collage paintings were on display at the hall of Best Western, Milton, Canada in a Music & Art show organized by International Art Centre, Canada.

Apart from being an avid artist, Adish is a keen sportsman indulging in various sports and has been a state level hockey, badminton and cricket player. He has remained associated with several sports organizations. Too served as Liaison Officer of Haryana Ranji Trophy Cricket Team.
Presently, he is holding the post of Joint Secretary - All India Cricket Association for the Physically Challenged and once travelled with Indian Handicapped Cricket Team as Team Manager to South Africa in July 2014. Recently in August 2019, he got the privilege to serve Indian Disabled Cricket team as an official for the world cup series at England where India won the championship.
A keen trekker & traveler, he used to contribute articles for the leading news papers of India. One article '' Prepare smartly for a hassle free holiday experience'' published in DNA, Mumbai was appreciated by many readers.

A veteran badminton player, he is also holding the post of President - Mumbai United Master's Badminton Association ( MUMBA). Beside art, he is doing his textile duty as a Sr. Vice President of a renowned textile company of Bombay.  He excels and loves to play on Harmonica (Mouthorgan) and used to participate at many musical events.

In the September 2018 edition of Spice Jet in-flight magazine, Adish Jain's paintings are  given the space with a caption of 'Beauty From Torn Paper'.
The exhibition named as ' Paper in Space ' at Jehangir Art Gallery, Mumbai was  commenced on 29th October 2018 and visited by thousands. On asking that who give you most encouragement, he named the famous Indian nature & wild life photographer Sh. Somesh Goyal, IPS, currently Director General of Police, Himachal, who has been his college mate and the man who first judged his collage making talent, encouraged him a lot and was instrumental to introduce him to the world of art as well in organizing his first ever art exhibition at Jehangir in year 2012. That exhibition was too a great success. 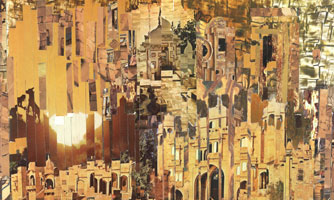 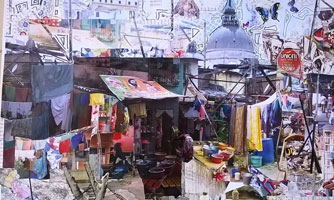